Python is one of the most versatile programming languages; from researchers running their test models to developers using it in heavy production environments, it has use cases in every possible technical field.

In this tutorial, you will learn how to use Brownie framework to write and deploy a smart contract by leveraging QuickNode testnet nodes for Polygon.

What you will do​

Smart contract development is majorly dominated by JavaScript-based libraries like web3.js, ethers.js, Truffle, and Hardhat. Python is a versatile, highly used language and can also be used for smart contracts / Web3 development; web3.py is a compelling Python library that fulfills Web3 needs. Brownie framework is built on top of web3.py.

Brownie is a Python-based framework to develop and test smart contracts. Brownie has support for both Solidity and Vyper contracts, and it even provides contract testing via pytest.

To demonstrate the process of writing and deploying a smart contract with Brownie, we will use Brownie-mixes which are template projects. Specifically, we will use a token mix, which is a template of the ERC-20 implementation.

Brownie is built on top of python3, so we need it installed to work with Brownie. Let us check if we have python3 installed on our system. To do so, type the following in your command line tool:

This should return the version of python3 installed. If not installed, download and install it from the official Python website.

Now that you have installed python3 on your system, let us install Brownie using pip, Python's package manager. Pip is similar to what npm is for JavaScript. Type the following in your command line:

If the install fails, you can use the following command instead: sudo pip3 install eth-brownie

To check if Brownie was installed correctly, type brownie in your command line, and it should give the following output: 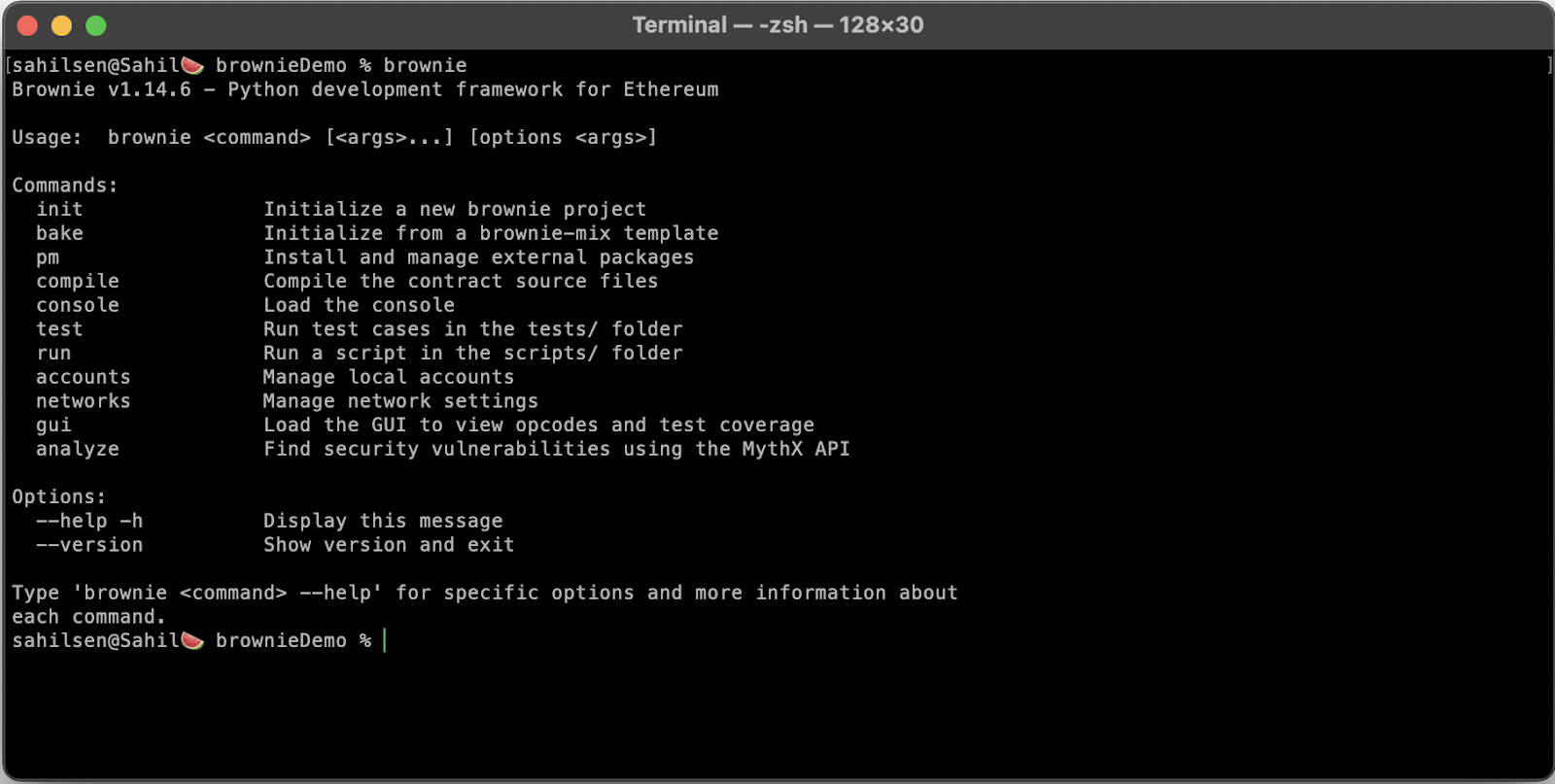 To get the token mix, simply type the following in your command line:

This will create a new directory token/ in our brownieDemo directory.

First of all, navigate to the token directory:

Now, open the token directory in your text editor. Under the contracts/ folder you will find Token.sol, which is our main contract. You can write your own contracts or modify Token.sol file.

Under the scripts/ folder, you will find token.py Python script. This script will be used to deploy the contract, and modifications are needed based on contracts.

The contract is an ERC-20 contract. You can learn more about the ERC-20 standards and contracts in this guide on ERC-20 tokens.

QuickNode has a global network of Polygon Mainnet and Mumbai testnet nodes. They also run a free public Polygon RPC but if you get rate limited, you can sign up for a free trial node from QuickNode.

Copy the HTTP URL, which will be useful later in the tutorial.

We need to set up our QuickNode endpoint with Brownie. To do so, type the following in your command line:

Replace YOUR_QUICKNODE_URL with the Mumbai Testnet HTTP URL that we just received while booting our Polygon node.

In the above command, Ethereum is the name of the environment, and matic_mumbai is the custom name of the network; you can give any name to your custom network.

The next thing we need to do here is to create a new wallet using Brownie, to do so type the following in your command line:

You will be asked to set up a password for your account! After completing the steps, this will generate an account along with a mnemonic phrase, save it offline. The name testac is the name for our account (You can choose any name that you like).

Mnemonic phrases can be used to recover an account or import the account to other non-custodial wallets. The account you see in the image above was just created for this guide.

Copy the account address so that we can get some test MATIC, which will be required to deploy our contract.

We will need some test MATIC tokens to pay for gas fees to deploy our smart contract.

Copy the address of your account which we generated in this tutorial, paste it into the address field of Polygon faucet, and click on Submit. The faucet will send you 0.2 test MATIC.

Before deploying the contract, you need to compile it using:

Now open the scripts/token.py in your text editor, and make the following changes:

Using the above code, we have imported testac account which we created earlier, and stored it in acct variable. Also, in the next line, we have edited 'from': part to receive data from acct variable.

Finally, we will deploy our smart contract:

matic_mumbai is the name of the custom network which we created earlier. The prompt will ask you for the password that we set earlier while making the account.

You can check out the deployed contract by copy-pasting the contract address at Polygonscan Mumbai.

Brownie also offers the option of testing smart contracts functionalities. It uses the pytest framework to easily generate unit tests. You can find more information about writing tests on Bronwnie on their documentation.

This is how contracts are deployed on Polygon using Brownie and QuickNode.

QuickNode, just like Polygon, has always had an education-first approach providing developer guides, docs, tutorial videos and a community of Web3 developers who are eager to help each other.