Based on the principles of Self-Sovereign Identity (SSI) and cryptography, Polygon ID is a decentralised and permissionless identity framework for web2 and web3 applications. The SSI framework lets individuals own and control their identities.

You can always refer to our twitter page to stay updated with the Polygon ID latest development.

Polygon ID, with the help of zero-knowledge proofs, lets users prove their identity without the need of exposing their private information. This ensures both the Freedom of Expression to anyone who intends to use the Polygon ID and Privacy by Default, as users' identities are secured by zero-knowledge cryptography.

Every identity-based information is represented via a Claim. In the simplest terms, a claim represents any type of information related to an individual/enterprise/object. The claim could be as simple as the age of the entity or the highest degree held by it or even a membership certificate issued by a DAO.

The architecture of the framework is composed of three modules: Identity Holder, Issuer, and Verifier. These three, together, form what we call the triangle of trust. Let us see what role each entity plays in Polygon ID.

The verification of a claim can happen either off-chain or on-chain. 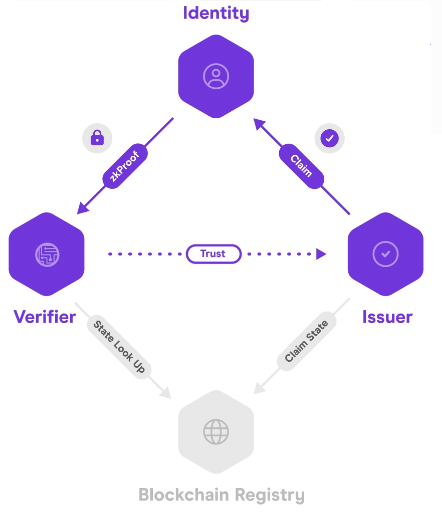 Role of a Wallet​

A Wallet plays a crucial role in the seamless exchange of claims and other related data with the Issuer, on one hand, and with the Verifier, on the other. As stated above, an Identity Holder carries his/her personal data, in the form of a claim, within their wallet. At its core, the wallet stores the private key of a user, fetch claims from the Issuer, and create zero-knowledge proofs to be presented to the Verifier. Being the carrier of the sensitive information, the Wallet has been designed to ensure that the identity of its Holder is protected and preserved, and no sensitive data can be revealed to the third party without the consent of the Holder.

What can you achieve using Polygon ID?​

Iden3 is the open-source protocol at the basis of Polygon ID. The protocol defines on a low-level how the parties listed above communicate and interact with each other. Polygon ID is an abstraction layer to enable developers to build applications leveraging the Iden3 protocol.